AUXITO LED Bulbs are a massive improvement over the stock f150 halogen bulbs and really help see the road. The bulbs are very bright but not bright enough that it blinds other drivers, as long as you adjust the f150 headlights once installed. The factory dust cover fits very well once the new bulbs are installed.

Replacing the LED light is a simple and inexpensive way to make night driving safer for F150 drivers. Best beam pattern: AUXITO H13/9008 led bulb adopts double-sided ZES led chips and the same lighting position design to produce a perfect beam pattern, with no dark spots or foggy light. At any time, you can quickly switch the function of the F150 high beam and low beam to ensure the need for brightness in driving.

Using fog lights that are more penetrating and waterproof and shock resistant can minimize the danger in bad weather conditions.

These F150 LED fog light bulbs will light up your night! The focused beam of the LED ensures a uniform beam pattern. Installation is a breeze!

If you need the other LED bulbs, please check the model user manual or contact us by mail support@auxito.com

It’s very nice led ever seen. So bright and nice colour 6500k I like. Thank you so much for this kit 😍😍 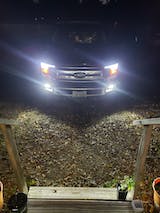 So far so good I’ve had them for a week and work great. If you have big hands good luck trying to get the old ones out and the new ones in.

these are so much better than stock Nissan interior lights. I can see now.

I had an issue with these working at first, I had pushed them in too far. Pulled them out a bit and they are bright.